When the Covid-19 pandemic began so too did the sweeping war metaphors to describe the global and personal situations we were facing. Our armies of front-line health care workers led the charge against the enemy, leaving the rest of us to navigate the home front (literally in our homes). The list goes on. The similarity between war and this pandemic I can’t get out of my head this Remembrance Day is that of how the world continues after an event that irrevocably changes it.

I’m not suggesting the pandemic is over and we charge ahead with comparisons to post-war Canada, nor am I suggesting that such a comparison is fair.  This Remembrance Day, I’m reflecting on that nagging similarity and the folks of post-World War Two Lennox and Addington, both those returning home from overseas and those who remained at home for the duration of the war.

In 1945, soldiers and military personnel returned to their homeland, to their lives, yet at the same time, not their lives at all. What does a soldier do after returning when all they’ve known for the past few years is to serve in the military? What did the jobs look like after the war in Canada for people working in a war related field, only to be dismissed once the war was over and their services no longer needed? The government, at all levels, had ideas for job creation and economic stimulation as evidenced in our local paper, the Napanee Beaver.

The province was clearly planning a boom in road construction before the war was even over, a plan that would catapult the Ontario economy into the future. Readers of the Napanee Beaver on December 6, 1944 would see the following article about Premier George Drew’s plans for road development: 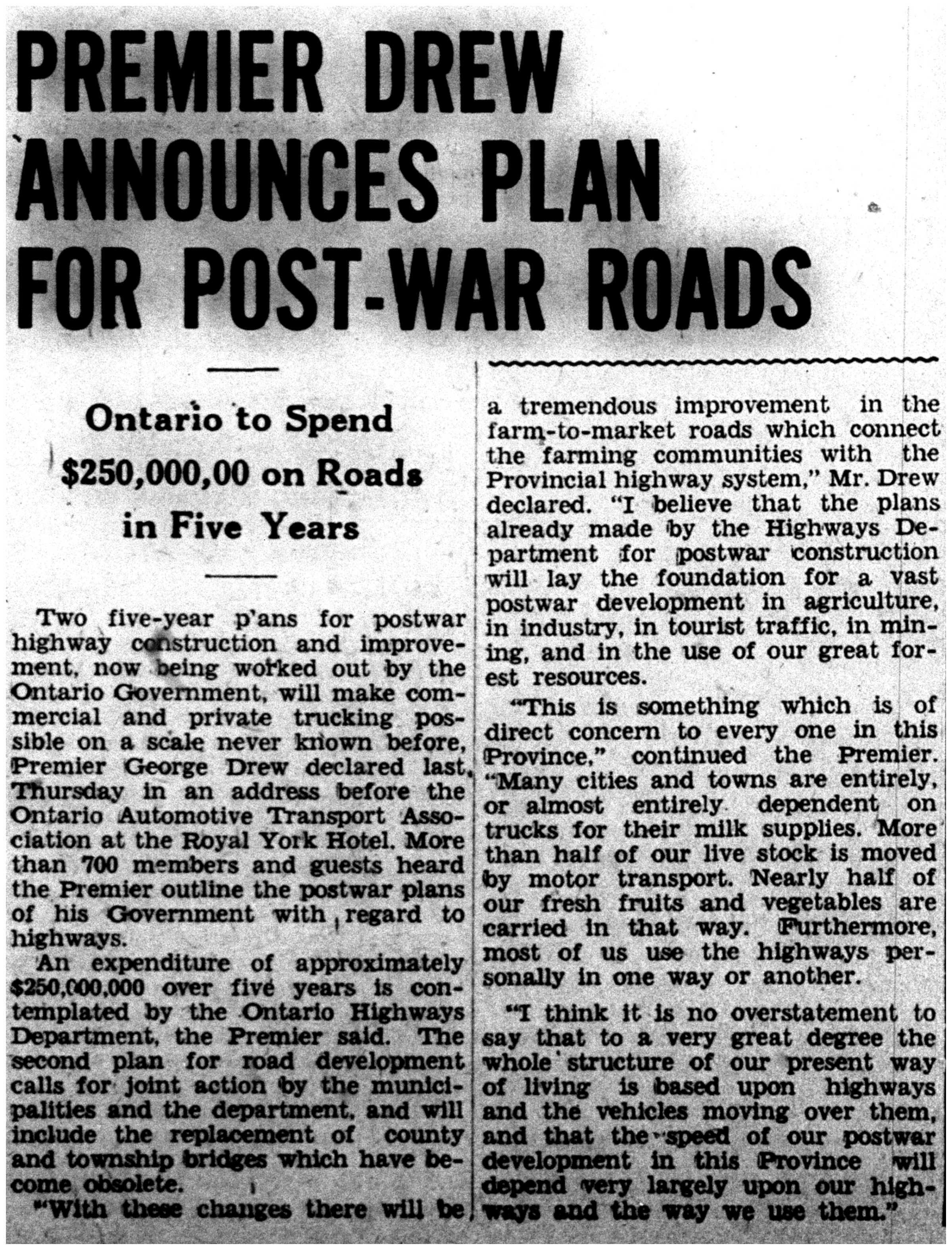 "I think it is no overstatement to say that to a very great degree the whole structure of our present way of living is based upon highways and the vehicles moving over them, and that the speed of our postwar development in this Province will depend very largely upon our highways and the way we use them."

In the January 17, 1945 issue, Napanee mayor Duane R. Hall M.D. provided ideas for postwar development and jobs ranging from acquiring a modern municipal snowplow to building a commercial airport in Napanee. His vision of a hospital eventually came to fruition but we’ll never know if council heeded his advice on always having industrial activity on their minds.

"These works will provide employment for our men when they return from the fronts. In these postwar undertakings I am assured that we will have material assistance from both the Federal and Provincial Governments as part of their post-war reconstruction and rehabilitation plans."

Next came a federal plan recorded in the March 7, 1945 issue in the form of the Farm Improvements Loan Act passed at a recent session of Parliament. Farmers could now borrow money at a lower interest rate for up to ten years to make improvements to their farms such as new machinery and a new home or barn. 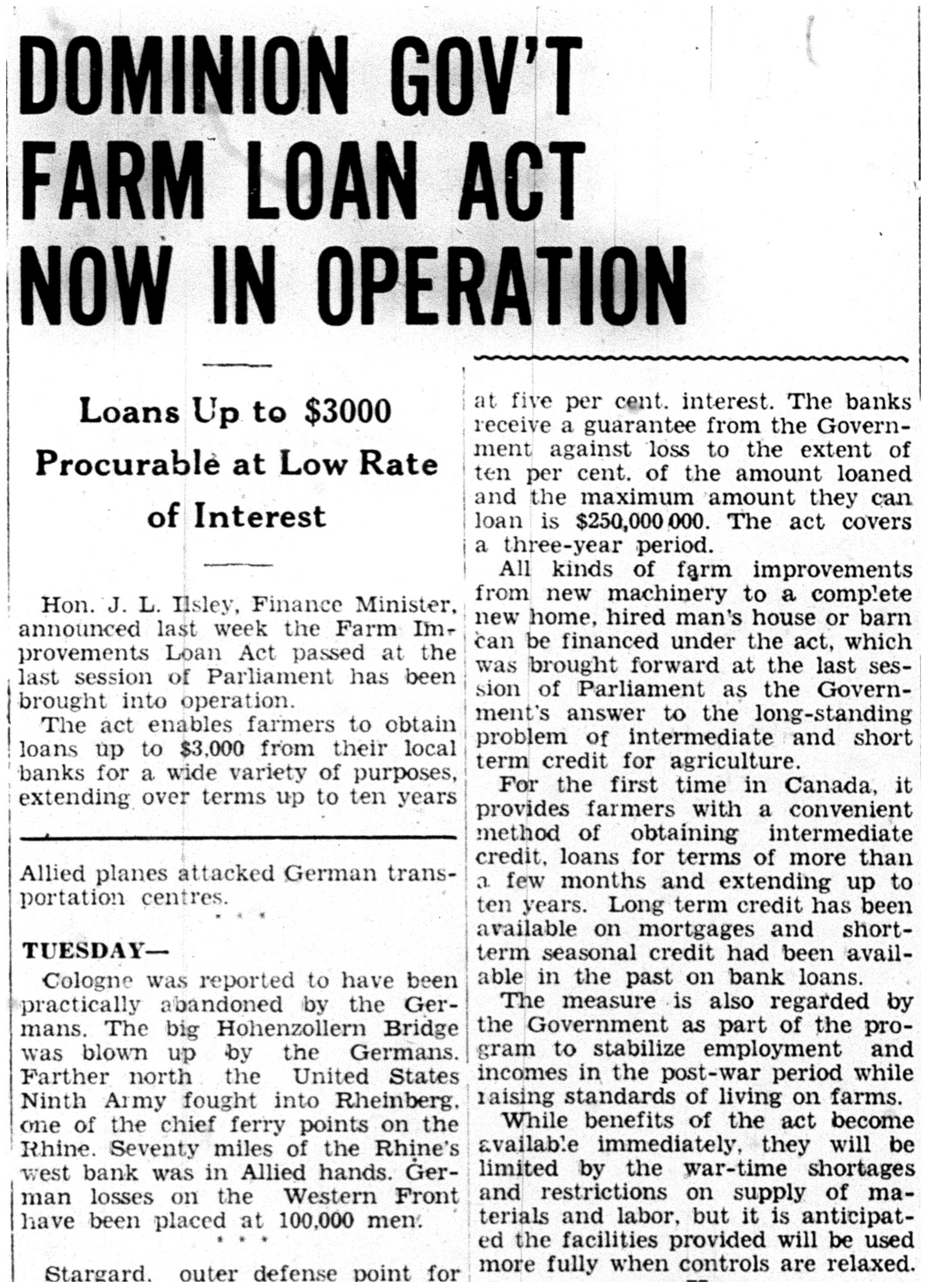 "The measure is also regarded by the Government as part of the program to stabilize employment and incomes in the post-war period while raising standards of living on farms."

Getting the economy back on track and people working again was at the forefront of post-war Canada, not unlike the situation we find ourselves in currently. I know this Remembrance Day I’ll be thinking about how uncertain life and the future must have felt for post-war Canadians trying to return to their lives shifted by a global event.