Once in a while the Archives receives a donation with cultural significance in and beyond the borders of Lennox & Addington. One such donation is the Sir Gilbert Parker collection received in 2016.

In Camden East, there is a historic site plaque dedicated to Sir Gilbert Parker. Gilbert Parker was born in the hamlet of Camden East in 1860. His father, Joseph Parker, was a retired soldier who had a mercantile business. The family later moved away from Camden East, settling finally in Belleville. Parker attended Trinity College (Toronto) briefly. He served as curate at St. George’s, Trenton, but was not ordained. 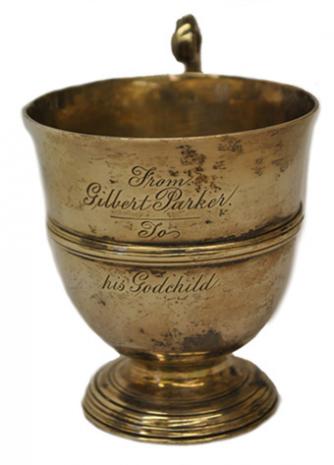 In September, 1885, Parker sold his library and left his manuscript poems with Florence Bleasdell, daughter of the Rector and departed for a tour of the South Seas. Parker stayed for a while in Australia, then moved to England where he began a writing career. In 1900 he was elected Member of Parliament for Gravesend. He held the seat until resigning in 1918. During the First World War, Parker was an important member of the staff of the Ministry of Propaganda. After the war he travelled frequently to the United States, particularly to California, where many of his novels were being used as the basis for motion pictures.

Parker died in 1932. Sir Gilbert Parker received a knighthood in 1902 for his contribution to Canadian literature, and was conferred a Baronet for his war efforts in 1915. He knew most of the famous British politicians of his day as well as authors, film makers and theatrical folk.  He is buried in Belleville.

The donated collection contains two notebooks of manuscript poetry written by Sir Gilbert Parker, a scrapbook of newspaper clippings about the author, copies of two of Gilbert’s books, correspondence, public auction flyer for Gilbert’s personal library from 1885, and an interview with Gilbert by the US Associated Press, 1916.